Studies on Quality and Functionality of Meat and Meat Products 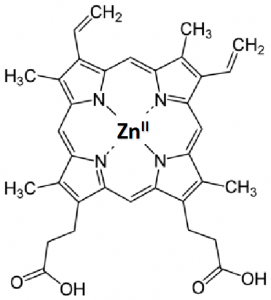 A recent report indicated that a large amount of zinc protoporphyrin IX (ZnPP) (Fig.), in which zinc instead of iron is coordinated, exists in dry-cured ham with no addition of nitrite/nitrate, such as Parma ham(Wakamatsu et al. 2004a, 2009). Parma ham is a traditional Italian dry-cured ham, and the color is very aesthetically pleasing despite no addition of nitrite/nitrate. ZnPP might be useful to improve the color of meat products without the addition of nitrite/nitrate. Despite reports on the involvement of ferrochelatase (Taketani et al. 2007) or microorganisms (Morita et al. 1996) and on the inhibition of ZnPP formation by nitric oxide (Wakamatsu, et al. 2010) or oxygen (Wakamatsu et al. 2004b, 2007), many aspects of the mechanism by which ZnPP is formed in Parma ham remain unclear. The liver has a well-developed ability to form ZnPP and might be useful for improving the color of meat products (Wakamatsu et al. 2015). ZnPP is expected to be used for color improvement of meat products without nitrite/nitrate.

In traditional Chinese medicine, every food item is classified according to the reactions or symptoms that occur after its consumption. One such classification is termed “thermal nature.” “Hot/warm” food items are said to warm the body, facilitate metabolism, and increase immune strength, whereas “cold/cool” food items are said to cool the body, suppress inflammation, and alleviate fever. “Neutral” food items are said to have none of the functions of either hot/warm or cold/cool food items. This classification system is based not on scientific evidence, but on experiential knowledge. Meat originates from the skeletal muscle of mammals and poultry. There are no morphological or physiological differences among different types of meat, though the fat content differs with respect to nutritional characteristics. The thermic nature of meat differs remarkably among animal species (Table). 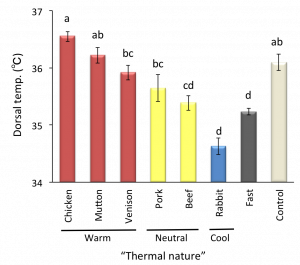